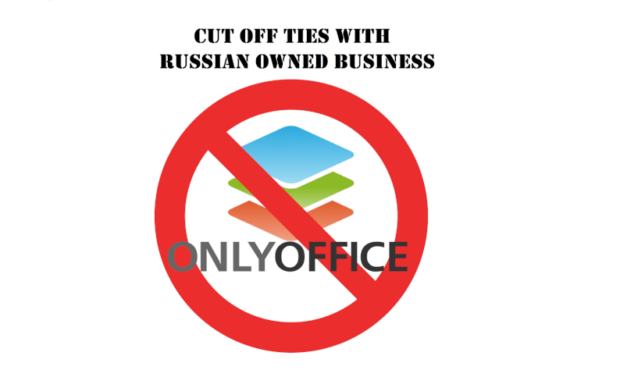 With an immediate effect as of March 25, 2022, DMS Solutions breaks all business relations and stops doing business with OnlyOffice (developed by Ascensio System SIA) – a russian owned company, which supports (does not condemn) brutal and unprovoked russian invasion of Ukraine.

OnlyOffice is positioned to be an open-source software, which in fact has limited functionality until commercial license is purchased from the developed by Ascensio System SIA (a company with formal registration in Latvia).

DMS Solutions is joining other leaders / businesses around the globe in stopping doing business with companies that support russian invasion of Ukraine. Any company that is now operating (paying taxes) in Russia and/or russian owned business that has not condemned officially russian invasion of Ukraine is considered as such that supports war in Ukraine – the war that is resulting in tragic loss of thousands of innocent people (civilians, women, children) and which has caused the greatest humanitarian crisis and instability in the world since the Second World War.

With Russia’s brutality in Ukraine, we are witnessing millions of Ukrainians (women, children) have been forced to flee their homes. A russian nuclear dictatorship is trying to wipe out a functioning democracy, committing daily acts of atrocities: innocent people (kids) are being brutally killed, infrastructure are being destroyed, cultural heritage is being ruined.

The russian invasion of Ukraine has fundamentally changed attitudes to Russia and russian owned/managed businesses in the world. The whole world is now united in imposing sanctions to Russia, which we strongly support.

According to one of the top global law firms Allen & Overy - companies still operating in Russia are exposing themselves to severe reputational as well as criminal liability.

As per earlier released statement, DMS Solutions condemns the attacks of Russia on Ukraine, and DMS Solutions stands with Ukraine and the Ukrainian people, including our own colleagues and their families, clients and partners.
_________

Fact Note: During the last two weeks DMS Solutions has been officially approaching OnlyOffice with requests for clarification on whether OnlyOffice condemns the Russian invasion of Ukraine. Upon our numerous requests and reminders - DMS Solutions received a short response from OnlyOffice team (Galina Goduhina, Sales Director) that OnlyOffice stays away from “politics”. Not giving war its real name and hiding behind the word “politics” when the whole world is united saying this is brutal war and russian invasation of Ukraine violates all the principles of international law - is a worrying message, especially considering that all global business communities and world leaders are calling for actions and official statements on the unprecedented Russian invasion of Ukraine. No further response from OnlyOffice has been received.